Herbert Chavez has transformed himself from a mild-mannered dressmaker into a real-life Superman – thanks to nineteen plastic surgeries to copy the comic book heroes look.
The 35-year-old, from Calamba City, Philippines, has had nose jobs, skin whitening, lip liposuction, jaw realignment, pectoral implants and even abdominal implants to become a real-life Clarke Kent.

Herbert first fell in love with the superhero – famed for his red cape and ‘S’ logo – when he was five-years-old watching him on TV. Over the next 30-years, he has splashed around 300,000 Pesos (£4,400) on his obsession – a fortune compared to the average 90p hourly wage in the Philippines. Herbert regularly takes to the streets around his home dressed in full Superman regalia, with his hair gelled in distinctive curly fashion. He aims to teach kids good morals while also brightening their days.

Herbert said: “I feel like a Superhero whenever I pull on the costume, but my mission is not to save the world but to help in my own small way and bring a smile to the faces of local children. “I don’t have any regrets at all. People come up to me in the street all the time and want their picture taken with me. They are all really excited to see a real-life Superman in the Philippines.” 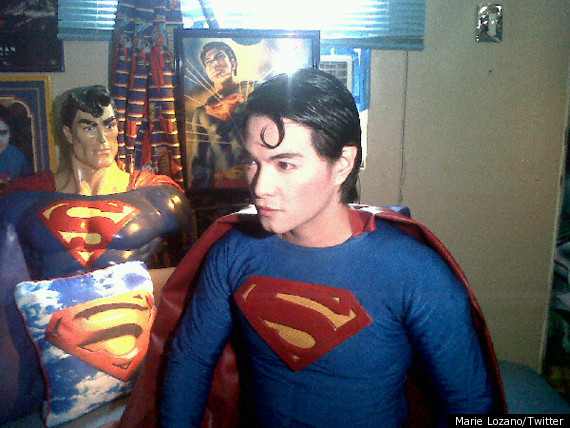 But his distinctive look has not come easily, with Herbert going under the knife repeatedly to copy every last feature of the superhero he worships – right down to his chiseled chin.
And Herbert admits it is tasking trying to keep up with such a “perfect” person. He added: “If you talk about superheroes, the expectation of people is that they are flawless, they do not get hurt, and they do not die.“But as human beings, we can only copy their looks. Especially as a Filipino, I have very Asian features and did not look like the Caucasian Superman. So when I was able to save enough money to alter my features, I chose to copy those of Superman. “It is hard living up to people’s expectations as a living superhero. That is the reason I have had so many surgeries because I undergo maintenance procedures that need performing. “For example, my cleft chin is formed of hydrogel, but it does not always appear balanced. The more dehydrated you get the smaller it gets, so you have to keep adding to it. “I am such a good customer of my surgeon, Tito Garcia, he does all the work for free as part of a part-exchange deal. I help publicize his practice in return.”

Herbert now plans to keep improving his look with more operations to make him taller and surgery to beef up his abdomen and bum. But he acknowledges that there may be a day when he has to halt the extensive surgeries. Herbert said: “I totally don’t have any regrets. What is there for me to regret? Everything that has happened in my life has been positive and because of Superman. “When my body says it cannot endure it anymore or when my doctor says that my body cannot handle it because of age, then I will stop.”

Single Herbert creates his own Superman costumes, T-shirts and clothing from scratch at his dressmaking shop. And the 35-year-old, who has featured on Billboards in his native country, says he hopes to one day meet a partner who can share his love of Superman.
Herbert said: “I am single but also inspired to find another person to share my passion with.” But they will have to put up with his huge collection of Superman memorabilia – built up over decades worth of obsession. In June 2013 Guinness recognized Herbert for having the largest collection of Superman memorabilia with 1,253 items – ranging from life-size dolls to posters and rings worth thousands of pounds.

But Herbert says his collection is actually closer to 5,000 items and plans to increase it to around 10,000 pieces – and has even moved home in order to accommodate the influx of comic book clutter. Now famous in his native country thanks to numerous TV appearances, Herbert’s friends and family are supportive of his unusual hobby. His mum Linda said: “I remember when he was a kid, he was already fond of Superman figures. He would be very happy when I bought him shirts with Superman pictures on them. “At school, they held drawing competitions, and he would always draw Superman pictures. “As parents, we are happy because though he is small, he has become the Filipino Superman. He has become well known in our community – he has become people’s idol.”

Accessibility: If you are vision-impaired or have some other impairment covered by the Americans with Disabilities Act or a similar law, and you wish to discuss potential accommodations related to using this website, please contact our Accessibility Manager at (425) 827-7878.

It is with great pleasure that we announce the opening of our practice May 19,2020. Our clinic, operating facility, skin care and noninvasive center (ENIC) will resume their full activity. This is in line with Governor Jay Inslee lifting elective surgery ban effective midnight May 18, 2020.

WE ARE HERE FOR YOU VIRTUALLY

Despite the challenging times we are faced with, we are still here for you and available during normal business hours for all inquiries via telephone and email. We are also offering on-line consultations for new patient inquiries.

Our virtual web consultations can be done right in the comfort of your own home, all you need is a secure internet connection and a computer, tablet or smartphone.

We welcome you, we are here for you. If you would like to have a VIRTUAL CONSULTATION or have any questions at all, please give us a call at (425) 827-7878 or contact us via the website to set up your virtual consultation today.

As previously stated, we are pleased to announce the opening of our practice May 19,2020. Our clinic, operating facility, skin care and noninvasive center (ENIC) will resume their full activity.

We know that so much of this has caused inconvenience for you. We want nothing more than to see our patients and resume what we do best. But we also know that we had to be patient and make sure that the timing is right.

We know clearly well that our work ahead is an important one. For over two decades we have considered safety as our most important prerogative. And, there has never been a more important time to put that to use.

As we stage the comeback of our States businesses and our own practice, we clearly understand that we must do everything in our power to ensure the safety of our patient, and our staff.

We also ask for your patience in the rescheduling process. Without any exception our patients have been kind, gracious and understanding. We sincerely appreciate your indulgence in this very difficult time.

Here is some of what we are doing to ensure that you are protected and that we maintain this facility as a Non-Covid Care (NCC) Zone:

As you can see, we are taking this very seriously. We fully understand that this will cause some inconvenience in the short term but realize that it is for the best.

Although Covid-19 is a serious issue, we strongly believe that it will pass and hopefully make our infrastructure and our ability to deal with pandemics in this Country even better than it currently is. We are monitoring this situation on a real-time basis and will not sit back until we know that we have done everything possible to avoid unnecessary exposure.

We know well that when you see us in action, you will realize that you have put your trust in the right practice.

State of Washington Department of Health

Please do not hesitate to contact us. We are always here to answer your questions

Email us at [email protected]